Jacqueline Bouvier’s wedding gown is one of the most iconic in US history. It’s only been in recent years that the designer has been revealed - Ann Lowe, a black woman originally from Clayton, Alabama. Lowe was one of the most sought after couturiers of her time, but in spite of the fact that she worked for many of America’s wealthiest families, such as the DuPonts, Rockefellers, Roosevelts, and Kennedys, she faced nearly constant racial discrimination.

Lowe came from a family of generations of skilled seamstresses, businesswomen who created bespoke dresses for elite Montgomery Society women.  At 16, she took over her mother’s business after her sudden passing. The first commission for 4 ball gowns for the first Lady of Alabama was her springboard. It was, Lowe said, “my first big test in life,” that lit a fire under her, “there was nothing I couldn’t do when it came to sewing.” An offer to be a private seamstress in Florida came two years later. In 1917 her employer sponsored Lowe’s admittance to New York's S.T. Taylor Design School. Despite being segregated from her white classmates, she flourished. Her teachers often held up her work as examples of skill and artistry to the other students. After graduation in 1919 she returned to Tampa, where she owned Annie Cone Boutique; a dressmaking salon strictly for white women on the Social Register a catalog of rich American families with long documented lineage.

A new partnership with Grace Stehli empowered Lowe to open Ann Lowe Inc on Madison Ave in the late 1940s. She was the first black designer with a couture business on the renowned strip.  By 1953 the partnership dissolved and her son became her new partner, as well as bookkeeper. They opened Ann Lowe Gowns on Lexington Avenue in 1955, catering to Manhattan's social elite.  Her one-of-a-kind designs featured fine handwork, trapunto quilting technique, her signature flower appliqués and embroidery, and the finest fabrics. Her customers were the wealthy socialites she always preferred. "I love my clothes," she told an interviewer for Ebony Magazine, "and I’m particular about who wears them”.  However she was “society’s best secret” since her clients did not promote her name, due to racism and self interest in her availability to continue to provide fabulous creations for their wardrobes.

The 1953 commission for Jackie Bouvier’s dress came from her mother, Janet Lee Bouvier Auchincloss. Janet was a regular client as her own dress for her second wedding was created by Lowe in 1942.  Both Jackie and her sister had already worn Lowe’s dresses for their debut in Newport a few years earlier. Ten days before the Bouvier-Kennedy wedding, a water line in Lowe’s shop broke and destroyed the wedding gown and the 10 of the 15 bridesmaids and attendants dresses. Lowe and her staff worked night and day to recreate everything, and protect her reputation. Not only did the designer suffer a huge monetary loss (estimated value $23,000 in 2022), she also reportedly never told the bride or her mother about the incident. When Lowe arrived to personally deliver the gowns to Jackie’s Newport home, she was directed by a staff member to use the back service entrance.  She refused, stating she would take the dresses back to New York, and she walked right in the front door.

In 1928 she moved to Manhattan, bringing considerable savings from her success in Florida, and a drive to build her own boutique. Compelled to create and happiest when sewing, Lowe’s personal life suffered due to her ambitions. Her two marriages were short lived as she juggled her career with single motherhood.  She left her first husband to take the opportunity in Florida, while her second husband left her in New York. "My second husband said he wanted a real wife, not one who was forever jumping out of bed to sketch dresses."  When women, especially black women were still expected to stay in traditional roles, Lowe wanted “to prove that a Negro can become a major dress designer.”

Lowe had difficulty finding a job during the Depression.  She freelanced for a decade for others designers and small labels, while slowly building her own client list. The Met Costume Institute has a wedding dress in their collection from 1941 that is one of the earliest garments with an “Ann Lowe” label. Olivia de Havilland wore a Lowe’s design to the 1947 Academy Awards, and took centre stage as the actress ended up winning Best Actress that year.  It was a stunning strapless dress in aqua tulle with hand painted flowers. However, Lowe's name was not on the dress label. It was Sonia Rosenberg of Sonia’s Gowns who had commissioned it.  This was not the first time Lowe went without public credit, and unfortunately wasn't the last. Lowe’s dresses for designer Hattie Carnegie also appeared un-credited in Vogue Magazine. In 1947 Lowe started a design job at Saks Fifth avenue, and commissions for high end stores such as Henri Bendel, Neiman Marcus, I.Magin, and many more followed.  New York Age, an African American Newspaper sending her to Paris several times between the late 1940’s to early 1950s to work as a guest fashion reporter. In Paris, she met prominent designers such as Christian Dior. 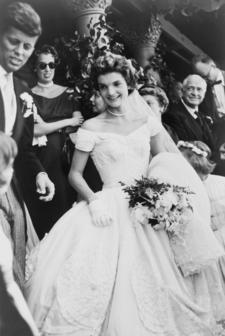 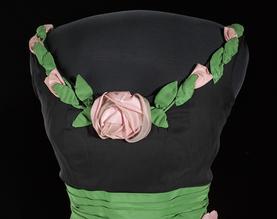 Ann Lowe in the early 1930s, wearing one of her creations. Photo cover of  Something to Prove; A Biography of Ann Lowe: America's Forgotten Designer, by Julia Faye Smith. available to purchase on Amazon 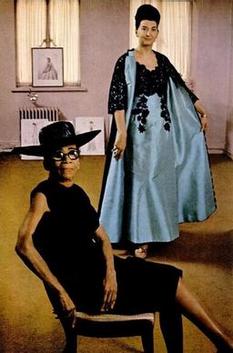 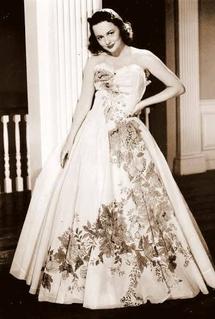 For more information on Ann Lowe:
★Something to Prove; A Biog​raphy of Ann Lowe: America's Forgotten Designer, by Julia Faye Smith
★Ann Lowe (1898-1981) The Smithsonian National Museum of African American History and Culture
★Dean of American Designers, Ebony Magazine Dec 1966 can be viewed through Google Books
★You Tube;  Ann Lowe on Mike Douglas show, 1964. This includes a 4 dress fashion show, and a wedding gown modeled by Mia Farrow. 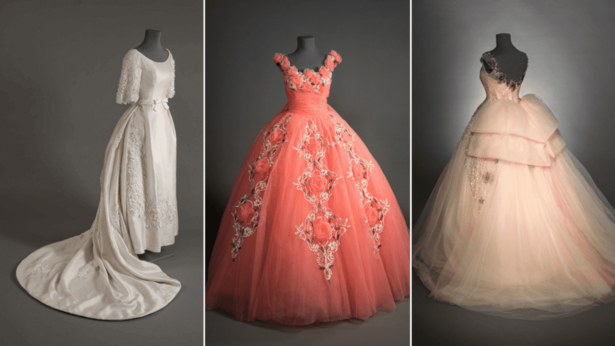 As millions of Americans admired the wedding gown, Lowe's name was left out of the story. The New York Times described the gown in pain staking detail in the New York Times, with no mention of the designer. Only the Washiongton Post fashion editor Nina Hyde named her, ‘the dress, designed by a Negro, Ann Lowe.’ After she became first lady, Jackie was interviewed by Ladies Home Journal and asked about the dress designer.  She answered that it was made by “a colored woman dressmaker, not the haute couture”.  This article so upset Lowe that she wrote a personal letter to Jackie that can be viewed online today from the JFK Librarycollection. It wasn’t until after the Kennedy assassination that Lowe was acknowledged, when her own public profile had been raised in the fashion press. In 1961 she received the Couturier of the year award.  One of her dresses was featured in a Vanity Fair editorial shoot. In 1964 the Saturday Evening Post article called Lowe "Society's best kept secret", and she was a guest on the Mike Douglas show. Ebony magazine wrote a large feature on Lowe in 1966 referring to her as "The Dean of American Designers.

Lowe told Ebony magazine at one point in her career, she was able to "turn out an average of 1,000 gowns a year, had a staff of 35, and grossed $300,000 annually." Sadly, the extreme wealth of her clients wasn’t enough to keep her business afloat. They would often talk Lowe into taking less and she frequently lost money. Retailers did not advance her funds to cover materials and labor, while she waited for their payments for the finished gowns. Fashion is a difficult business; many designers have trouble balancing commerce and creativity without a solid partner. Her son had been her book keeper and partner, but died tragically in a car accident in 1958. In 1960 she had to close her salon, so she entered into a contract with Saks Fifth Avue. Sak’s contract for Lowe as head designer of their Adam Room brought them her clients, but was unprofitable for her; "Too late, I realized that dresses I sold for $300 were costing me $450." By 1963, she was forced to declare bankruptcy. There is a persistent, yet unsubstantiated, rumor that Mrs. Kennedy paid Lowe's debt to the IRS. 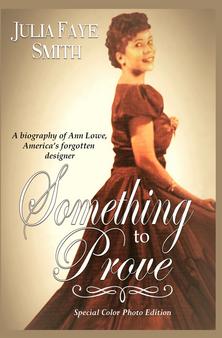 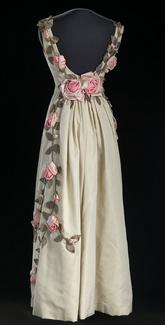 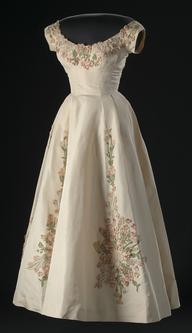 Paper recreation by Isabelle de Borchgrave of Jackie Kennedy's Wedding Gown, 2008.  Design by Ann Low, 1953. Commissioned for the John F. Kennedy Museum and Library, as the original garment is too fragile for public display.  Source: http://artifex-almanach.blogspot.com, click on photo to visit the site

After the foreclosure, Lowe moved on to work for Madeline Couture from 1962-65. Soon after Lowe developed problems with her sight, one of her eyes was removed due to complications from glaucoma, the other saved with cataract surgery. Even when her eyesight made it near impossible for her to sew, with her older sister Sally’s support Lowe continued designing evening and bridal gowns, never interested in the ready-to-wear lines that today’s designers are known for. Another Madison Avenue boutique, A.F. Chantilly Inc was opened in 1965, in partnership with a designer who focused on suits, coats, and cocktail dresses while Lowe created gowns for both wholesale and retail lines. Unfortunately Sally, an expert dressmaker, Lowe’s strongest supporter and caretaker passed away in 1967.  Lowe opened a new store Ann Lowe Originals, on Madison Avenue in 1966 which ran until her retirement in 1972. Ann Lowe passed away on February 25th, 1981.

Rediscovered as America's first BIPOC Couturier, Lowe’s creativity and quality of workmanship is recognized by curators today.  Her dresses are in the collection of the Smithsonian National Museum of African American History and Culture, and the Costume Institute of the Museum of Modern Art. Several others were included in an exhibition on black fashion at the Museum at FIT in Manhattan in 2016. Next year, in September 2023, the Winterthur Museum, Garden & Library will exhibit a collection of Ann Lowe's creations from the 1920s-1960s. 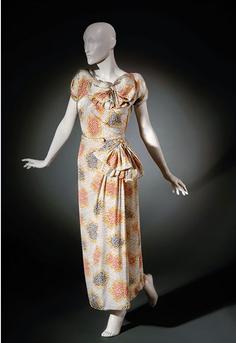